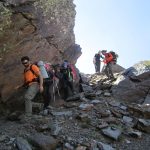 A long the history of earth mountains have appeared at different places. Sierra Nevada was formed at the same time as the most important mountain ranges from Europe and Asia, such as the Alps and the Himalaya. Such formations occurred at the end of the tertiary in a stage called Miocene.

Over time and after the glaciations, plants and animals began to populate Sierra Nevada. Due to its special situation of altitude and latitude it became full of trees, Mediterranean scrubs, endemisms, and aromatic plants (botanical jewels discovered by Bossier).

All this makes Sierra Nevada a special place to visit.

Discover Sierra Nevada in summer or winter. Walking through its peaks, climbing or skiing (mountain skiing).

Try it with GranAlpina. We have qualified staff who will guide you during the trip, organize your stay, and provide the equipment if necessary.